Albanian police said Wednesday they had thwarted a planned attack by a Tehran-backed “terrorist cell” against opponents of the Tehran regime in the Balkan country last year.

In a statement, police said the group belonged to the elite Quds Force which runs foreign operations for the Iranian Revolutionary Guard.

This cell “had planned, among other things, a terrorist act foiled in March 2018” targeting a religious celebration of the Bektashi, a Sufi group, in Tirana, the statement said.

The ceremony was attended by members of the exiled Iranian opposition group the People’s Mujahedeen of Iran (MEK), according to police.

In 2013 Albania agreed to take in some 3,000 members of the MEK at the request of Washington and the United Nations.

They currently live in a compound in the northwest of the country.

On Wednesday police published photos of three Iranians and one Turkish national allegedly involved in the “terrorist cell.”

The leader “resides in Turkey” and another “has an Austrian passport,” according to the police statement.

Police declined to confirm whether international arrest warrants had been issued. 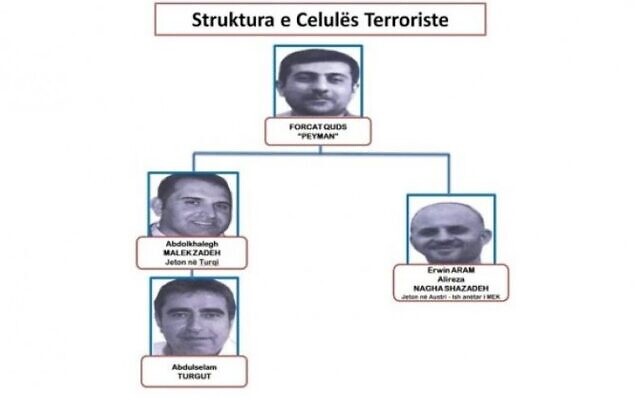 Authorities also did not say whether the incident had any connection to Tirana’s decision last year to expel two Iranian diplomats who the US accused of plotting “terrorist attacks” in the Balkan country.

In January the European Union sanctioned Iran’s intelligence services after accusing Tehran of being involved in plots to assassinate regime opponents in the Netherlands, Denmark and France.

Paris accused Iranian intelligence of being responsible for plotting a planned attack on a MEK rally north of Paris in June 2018.

Albania will withdraw from “mini-Schengen” if Kosovo is not included